This year’s candy packet came from Aina. Since our theme this year is “Asian Ghosts and Spirits”, Aina said we should make Makkuro Kurosuke candy packets… Y’know, that black fluffy thing from Ghibli movies My Neighbor Totoro and Spirited Away. We thought it was an awesome idea… And I’ll be wearing my Totoro hat while giving away the little black thing.

So, this was what we needed to make Makkuro Kurosuke:

And that was it. The tare panda wearing bee headpiece was optional, to keep you company while making a hundred of Makkuro Kurosuke.

So, we started with cutting the crepe paper to size. Basically, we planned to fit 3-4 candy in there, so around 20cm on each side was big enough.

After the cutting, we fit those candies within the crepe paper, fold it so it’s all covered and tape the loose ends with the masking tape. Using masking tape is more convenient than glue or regular tape, because we didn’t need scissors and it was much less messy. We could just rip the tape easily.

After the candies were wrapped, we added the eyes. First stick the black stickers on to the white stickers. We did it in pairs and made sure the eyes were looking the same way… To keep it cute, you could make the eyes looking at the same direction, or crossed eye. Try to avoid where one eye goes up and the other one goes down… it would just looked too wacky.

sticking the eyes in pairs

Aaaand, it’s all done! A hundred and forty nine more to go! 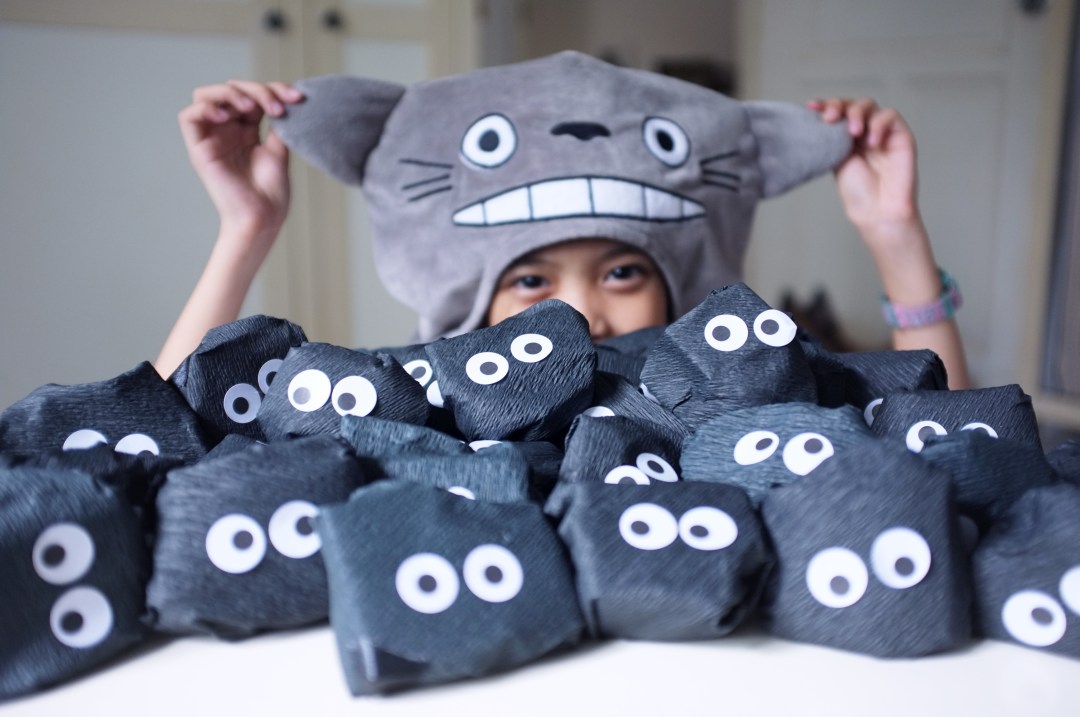 All photos are in the Makkuro Kurosuke Candy Packets photo album in Flickr.